One need only watch a few moments of Peter Strickland’s films to realize that the British-born, Hungary-based director is a stickler for detail. Visually, the hair, the makeup, and even the nail art of his actresses are immaculate, the costumes are stunning, and the set design is to die for. The music is always spectacularly retro, ’70s-inspired, with harpsichords and synthesizers and plenty of feminine “la la la” vocals. His actors sport fantastic looks; those from the very slight to the toweringly tall are all equipped with remarkable facial features, and collectively boast a wide range of international accents. So much care is put into the curation of his cinematic environment      that it comes as no surprise that his 2014 ode to European sexploitation cinema, The Duke of Burgundy, includes the credit “Perfume by Je suis Gizella,” a then-imaginary fragrance house. (Je suis Gizella eventually came into brief existence as a limited release, and later appeared in a bottle on a bathroom shelf in his next feature, 2018’s In Fabric.)

Giving credit to a perfume that the viewer cannot smell is typical of Strickland, who dutifully aims to inspire his audience’s imagination, having said once in an interview that his job is to “inject a script with a sense of taste, touch, atmosphere, all those things you can’t put into words.” At the same time, he situates his dramas within evocative social milieus that border on science-fiction territory. In The Duke of Burgundy, for example, two women without paying jobs reside in an ornate home, studying insects in a community that appears to be solely populated by lesbian entomologists who favor BDSM. In the world of In Fabric, it is common practice for washing-machine repairmen to hypnotize their clients with technical jargon, and for witchy department-store employees to experience “ecstatic” interactions with their customers while selling clothes.

Strickland’s latest work, Flux Gourmet, takes place at a strange creative retreat where avant-garde sound artists are treated like rock stars, hosting wild backstage orgies and giving interviews for a literary dossier. The subjects of Flux Gourmet are so-called “sonic caterers,” which happens to be a nod to the director’s former experimental noise group, The Sonic Catering Band (formed in 1996). There are no imaginary perfumes to sniff in the film, but one can practically taste the food on-screen, sizzling in a pan, its aural emissions blended and manipulated to make sounds that are both strange and familiar, then distorted through electronic gadgetry. Similar to the unnamed “sonic caterers” in Flux Gourmet, Strickland and his group performed and recorded a bizarre combination of cookery and noise sporadically for about 20 years. The Sonic Catering Band also performed on the soundtrack for Strickland’s debut feature, Katalin Varga (2009), following years of work with the sound recordist Clive Graham.

Strickland’s second feature, Berberian Sound Studio (2012), was even more laser-focused on the processes of sound than Katalin Varga, following the character of an uptight British engineer working on a giallo film in Rome. Creating violent sounds by smashing heads of cabbage, hacking into watermelons, and squeezing tender fruit with bare hands, engineer Gilderoy (Toby Jones) and his foley-artist studio assistants Massimo and Massimo (Jozef Cseres and Pál Tóth) toss the used, rotting husks of fruit and veggies into a large vat for disposal. Strickland repeats this image throughout the film, creating an undeniably eerie, unsettling, and visibly putrid effect. Some of the sonic-catering performance scenes in Flux Gourmet evoke a similar unease, reminding us of both the fragility of the natural world and the nastiness of misused food.

Where Berberian Sound Studio focuses on the creation of sounds that repulse and terrify, Strickland’s follow-up, The Duke of Burgundy additionally plays with sounds that titillate and soothe. A cat’s purr creeps onto the soundtrack at an unnaturally high volume while Cynthia and Evelyn (the two leads, played by Sidse Babett Knudsen and Chiara D’Anna) enact BDSM fantasies. Elsewhere in their home, an unseen clock ticks methodically, working in sync with the tapping of raindrops on a window to set a realistic room tone. Strickland cannot help but unnerve, however, and also introduces the polarizing sounds of insects: buzzing, fluttering, humming loudly. Cynthia is fascinated by the high-pitched trill of a particular insect, listening to a recording of it in her study. Evelyn, on the other hand, is irked by the insistent sound.

In recent years Strickland has leaned into the concept of ASMR, or “autonomous sensory meridian response,” commonly understood as the pleasantly visceral response to certain sounds, such as the crinkling of paper or whispering. All of Strickland’s films incorporate ASMR, even though the director himself had never heard of the phenomenon until the production of In Fabric. In 2020, during the height of the COVID lockdown, Strickland released a seven-minute short titled Cold Meridian that was meant to stimulate the experience of ASMR, with close-up shots of hair-washing alternating with the sights and sounds of ballet dancers rehearsing for a performance.

Before he’d heard of ASMR, Strickland spoke with Zsolt Gyori of Bright Lights Film Journal in 2010 about the imaginary potential of the act of listening: “Hearing is a far more active human sense than sight,” Strickland explained. “As a filmmaker, your potential to ignite an audience’s imagination is far greater through using sound. With images, most of the work is done for us, but with sound, you’re filling in the gaps and that is very exciting and provocative for the audience.” Over a decade later, Strickland makes this concept literal in Flux Gourmet, and adds an extra heaping dose of sly humor. The sonic-catering collective at the center of the film are hilariously self-involved; they are utterly consumed with the creation of sounds, and audiences at every performance are rapt—to say the least. But even as he pokes fun at the collective and their lofty ideals, Strickland builds empathy for the group’s “dossier” and narrator, Stones (Makis Papadimitriou), who is a slave to the sounds of his own gut. Suffering horribly from inexplicable gas, Stones lives in constant fear that other people will hear the effects of his stomach problems and does everything within his power—hiding in the bathroom, farting into pillows—to mask his malady.

When the leader of the collective, Elle di Elle (Fatma Mohamed, who has appeared in all the director’s narrative features), convinces Stones to participate in their performance (he eventually receives a colonoscopy onstage), Strickland spins a potentially icky situation into a rather sympathetic display of art and belonging. The colonosco-performance is really quite cool-looking without much in the way of shock value, and Stones eventually fortifies his self-esteem through his ultimate participation with the collective. Tying all of its plots together with a satisfying climax, Flux Gourmet is Strickland’s most refined and accomplished film yet, and pretty damn hilarious to boot. And, without giving too much away, the final scene serves as a master class in how the manipulation of sound (as well as some sights) can thoroughly stir the imagination. 🩸

is the host of “No Pussyfooting,” an online radio show on www.kpiss.fm. She is the editor of Paul Verhoeven: Interviews (UPM) and has contributed to Film Comment since 2006.

How to see Flux Gourmet

The IFC Midnight release opened in select theaters and on demand on June 23.

Walking in the Air

Within Michael Mann’s oeuvre of slick urban crime dramas and thrillers, his lone horror-fantasy film The Keep is an overlooked outlier, virtually ignored since its initial release in 1983. 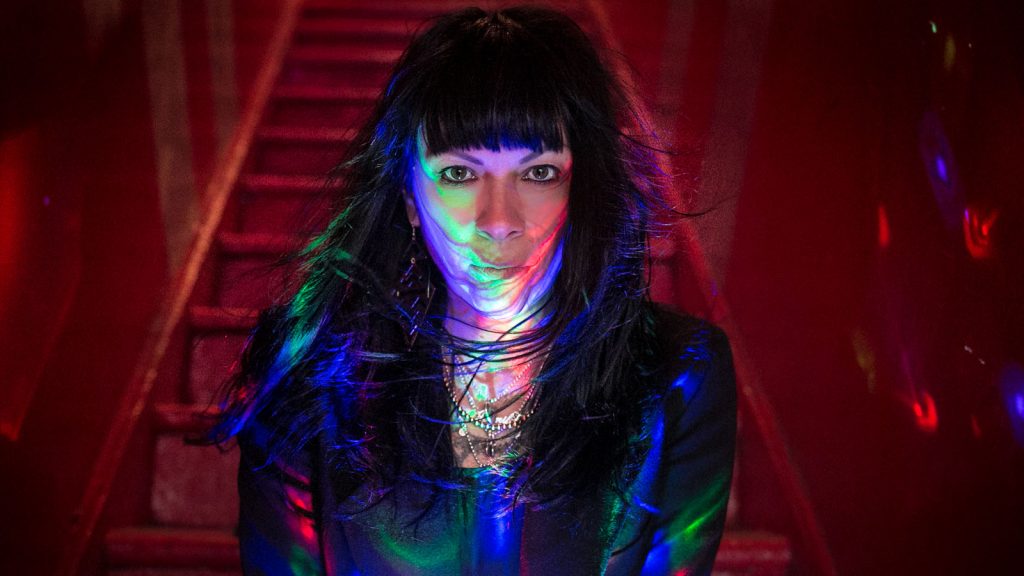 The Knives and Skin director talks about her feature follow-up Night’s End, collaborating with Shudder, and the creative freedoms afforded by the horror genre.

Jennifer Reeder is a proudly Chicago-based, truly independent filmmaker with over 25 years of experience in the business. She has directed more than 15 short films...